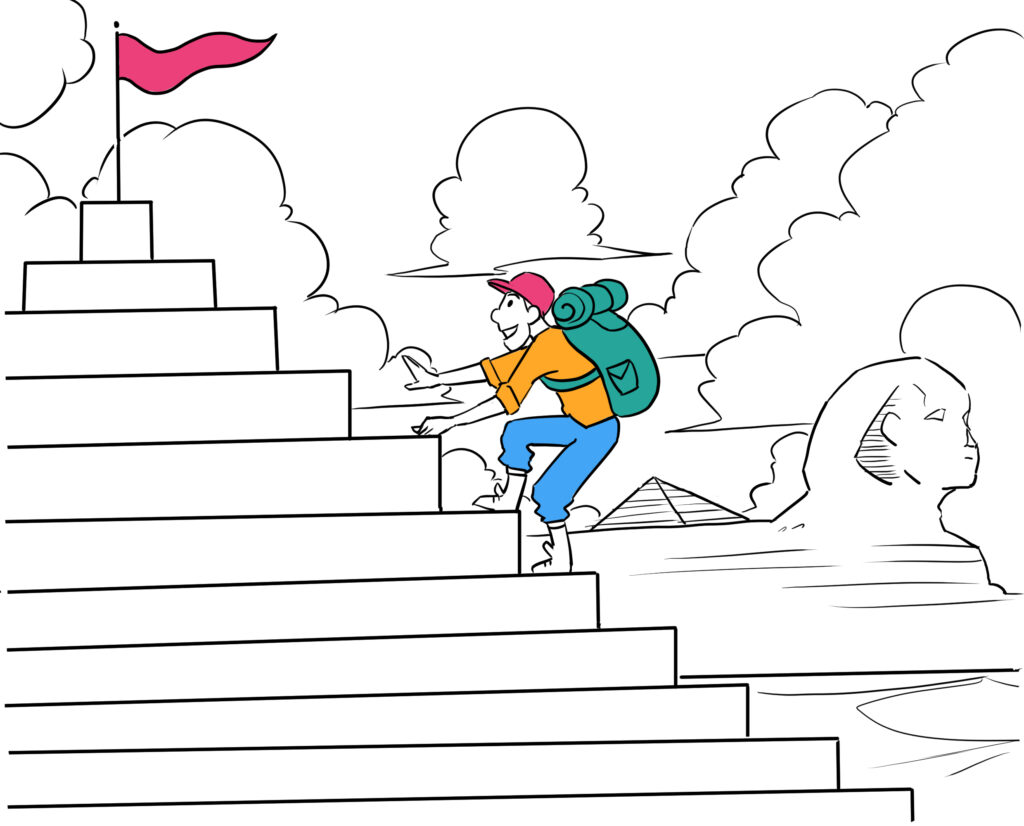 Why a Goal Pyramid Can Make You Happier and More Successful and How to Create One?

Goals pyramids are structures that link your top level goals to your lower level goals.

Creating such a structure is required in order to become happy and successful.

Here we show you why and how to create one.

You have different kinds of goals. For example, “I want to be happy” is a big, long term goal. On the other hand, “I want to buy a new pair of shoes” is a small, short term goal.

A goal pyramid is a structure that links:

For example, let’s imagine that you want to become a lawyer and you are studying in law school:

So the mission goal of becoming a lawyer can be achieved by the action of studying:

Now, that we understand the concept of a goal pyramid, let us look at why it is so important.

2. Importance of Each Level of a Goal Pyramid

The importance of the mission goal is that it is the ultimate reason. If this changes, then everything in the goal pyramid changes with it.

Thus, only one change on the top level, changes all goals on the lower level. That impact illustrates the importance of having clarity in your top goals, in order to avoid wasting time working on the wrong things.

2.2. Importance of the actionable subtasks

The importance of the lowest level goals, the actionable subtasks, is that this is the only level that you can influence by taking action. While it is true that you can pass the classes in order to become a lawyer, you can only do so by passing all exams! And how do you pass exams? By studying! The action is ¨studying law¨.

So by continuously asking the question “how”, you finally reach an actionable level, which is the only level where you can take actions.

2.3. Importance of the intermediate levels (projects and tasks)

From the above we see that goal pyramids and each level of a goal pyramid are very important for accomplishing your goals successfully.

A high level goal list could look as follows:

This kind of goal list gives you some orientation as it defines the ultimate why. However, it does not give you any clarity on how to achieve these goals, as the lower levels are missing. This can easily result in you trying out too many things and becoming defocused as you have not achieved clarity on how to accomplish your goals.

Also, it can lead to demotivation as no specific next step has been defined.

A low level goal list could look as follows:

This kind of goal list gives you some orientation as it defines the concrete things you want to achieve. However, it does not tell you why to achieve these goals, as the higher levels are missing. This easily leads you to a situation where you accomplish a goal and then ask yourself “What was the whole point of it?”. For example, you buy the Mercedes SLK and then after some time realize that you do not really know why you did it, as it does not make you happy.

Also, such a low level goal list can lack the motivational power as you likely have hundreds of low level goals and there is no clear way how these relate to each other, unless you put them into a goal pyramid.

So mid level goal lists have both main flaws mentioned above, lack of orientation and lack of knowing what to do next.

A multi level goal list is a combination of different level goals. Such a list could look as follows:

These lack the specificity on how to accomplish them.

These are very specific and lack the answer to why these things are important.

The only way to create both a list with the “why” and with the “how” and combine all goal levels is to create a goal pyramid.

4. The 2 Most Important Questions in Your Goal Setting

In trying to accomplish any goal successfully you need to regularly ask yourself two questions:

When you have a big goal you need to break it down by continuously asking “HOW?”, and thereby split the big goal into smaller actionable tasks.

For example, “Can you eat an elephant? Sure you can. You bite it one bite at a time! “

In the above example, of the goal to become a lawyer, you ask:

So you break the big goal down by asking “how” until you arrive at actionable tasks.

As your starting point is the big goal and by asking the HOW-question you are continuously getting to a lower level, this approach is called the Top-Down-Approach.

The “WHY” question is also important! You want to make sure that what you are currently doing is the best way to achieve your ultimate goals.

If you are currently studying a lot, you can ask yourself:

As you see, the WHY-question helps you uncover things that you are working on that might not be that relevant to accomplish your goals.

As your starting point is the actionable task and by asking the WHY-question you are continuously getting to a higher level, this approach is called the Bottom-Up-Approach.

5. How to Create a Powerful Goal Pyramid?

There are five steps to creating a powerful goal pyramid:

5.2. Step 2: Categorize the goals into your main life segments

Next, you categorize the goals into the main segments of your life. These could be:

This could looks as follows:

Next you order your goals in each category into the form of a pyramid. This can look as follows:

As you can see in the diagram there will be many goals (either high, medium or low level) that are not yet filled in. We have shown these missing goals by empty circles in the diagram above.

It is a bit difficult to order your goals in the exact form of a pyramid. Therefore, you should instead use one of two structures:

In a mind map you start with the highest level goal and put it into the center. Then you draw branches to each of the subgoals. From there you branch out further to the lower levels.

An Indented task list is very similar just that everything is in the form of a list and the lower levels are indented. The more indentation the lower the level.

5.4. Step 4: Answer the why question to get to the high level goals

After having organized your goals into different categories and related them to each other in the form of a goal pyramid, you now need to ask “why” for each goal. By doing this you will be able to fill in the missing goals on the higher levels of the goal pyramid.

This is shown in the diagram below. The goals you think about when asking why are indicated in gray.

5.5. Step 5: Answer the how question to get to the low level goals

Finally, you want to ask “how” to each goal in order to fill in the remaining goals that are not filled in on a lower level.

This is shown in the diagram below. The goal you think of when asking “how” is indicated in light gray.

The above process helps you create a goal pyramid.

Doing such a goal pyramid will help you in many ways:

As we have seen, goal pyramids are an extremely important tool for goal setting, staying organized, getting clarity and being productive.

Also, they are easy to implement with an indented task list and continually asking How and Why. However, most of the current project management systems do not fully support goal pyramids.

For that reason we developed a focus tool that enables goal pyramids as an important component. This software is called Workiamo.

We are really sorry that we were not able to provide a good enough experience to you.

Would you like to be informed when we launch the new and better IQ Elite?